Liverpool’s 2-1 loss against Manchester United at Old Trafford was explained by Klopp. 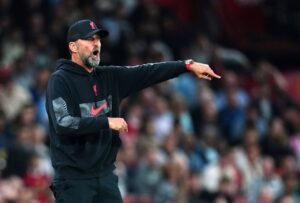 Jurgen Klopp confesses he is “concerned” by his team’s condition after their winless start to the Premier League campaign continued in disastrous manner.

Liverpool’s sluggish opening allowed Jadon Sancho to give the hosts a first-half lead, which was quickly doubled by Marcus Rashford.

Because of Naby Keita’s late withdrawal, Klopp was missing nine first-team players due to injury, while Darwin Nunez served the first of a three-game suspension.

Liverpool are now seven points behind the Premier League leaders, having drawn their first two games, and Klopp stated:

“We are in a tricky situation injury-wise, we got through the week with 14, 15 senior players available and now have to make sure they don’t get injured.

“I am concerned about our situation, but that is how it is. We prepare for Bournemouth and Newcastle now.”

In spite of possessing 70% of the ball, more shots on target, and more corners won than United, Liverpool was rarely confident that they could rally from a 2-0 deficit after giving up the first goal for the eighth game in a row. 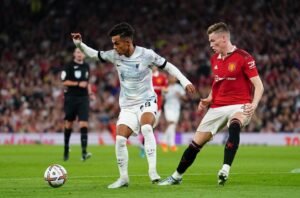 And Klopp added: “We should have won this game, I know it sounds ridiculous but that is how I saw it.

“My emotions? We lost, which says everything about my emotions. Very disappointed about the result, that’s it.”
Advertisement

Klopp admitted he was disappointed by his team’s inability to cope with the expected high-intensity start from United.

“If you saw both games, the differences couldn’t be bigger,” he said. “It was a game which was 100% clear what United would do.

“That’s how they started the game. Were they more aggressive than us in the beginning? Probably yes. It was exactly the game United wanted. We can say that’s our fault, but it was wild, up and down.

“They hit the post and then scored the goal, then we took over more or less and until the final pass or the final decision, we played like we should have played.

“Against so many legs in defence it’s not easy to create chances every 20 seconds but we had a lot of moments in the box, we were unlucky off the set-piece – I’m not sure how the ball didn’t go in. If we scored there… but we didn’t.

“When we scored our goal, which I think we absolutely deserved, it was slightly late. We had moments before where De Gea made top saves, with blocks and these kind of things, but these are the facts. We lost 2-1 because time ran out, because the watch ran down not because of football, but because of different situations.”

Liverpool is considering firing Jurgen Klopp, and a prospective replacement has already been contacted, according to reports.