Frenkie de Jong appears to be willing to negotiate a wage decrease in order to stay at FC Barcelona. 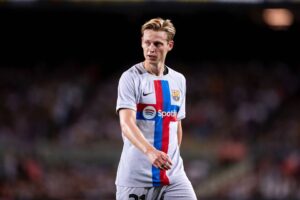 The Dutchman joined Barcelona from Ajax for a fee of €75 million ($74.8 million) in 2019, but he has become the subject of one of the biggest transfer sagas of the current window this summer, with Manchester United reportedly agreeing to pay the Catalans €85 million ($84.8 million) for their 25-year-old midfielder in mid-July.

De Jong turned down the Red Devils despite the fact that they are now managed by his former Ajax manager Erik ten Hag, with whom he embarked on an unlikely run to the elite European club competition’s semi-finals in his breakout 2018-2019 season, due to the Premier League team’s lack of Champions League football and a desire to make things work at Camp Nou.

SPORT reported on Friday that De Jong is certain to stay in Xavi Hernandez’s squad this season, and that his agent is even willing to negotiate a salary reduction to make this happen. Despite rumors this week that Liverpool would submit a bid for him.

De Jong insisted that deferring a portion of his pay once, in October 2020, while Josep Bartomeu was still president, was sufficient. He also allegedly harbored resentment toward Bartomeu’s successor Joan Laporta, and the club leaked information suggesting that this arrangement might have been unlawful.

De Jong’s camp, however, has had a change of heart and is prepared to meet with the Catalans and discuss restructuring his deal once more with proposals having being made on the subject in order to “reach a satisfactory solution.”

Both Xavi and Laporta have publicly declared that they want to keep De Jong, but the club needs him to cut his pay by 50% in order to comply with a new rule implemented under Laporta that prohibits first team players from earning more than €10 million ($9.97 million) annually.

Xavi, Barcelona’s manager: Bayern is not a “house of horrors,”

Chelsea, Barcelona part-exchange deal for Aubameyang and Marcos Alonso back on, per sources.

Chelsea, according to Sevilla’s sporting director Monchi, were responsible for failing to secure a deal for Jules Kounde