Back to the Premier League, one way or another. 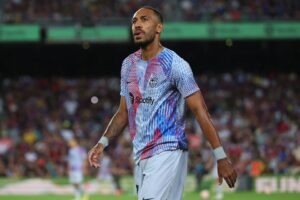 Chelsea have made little tangible progress in their efforts to recruit Pierre-Emerick Aubameyang, despite having accepted personal terms on a two-year agreement with a third option long ago.

The Blues have been in constant contact with Barcelona, and although they have offered £15 million plus Marcos Alonso, Barcelona is demanding £20 million plus add-ons and minus Marcos Alonso, according to the Evening Standard and Diario Sport. With Thomas Tuchel pushing for a reunion with his former striker at Borussia Dortmund, it’s still completely feasible that Chelsea will reach an agreement on the price.

However, Gianluca Di Marzio reports that Manchester United have joined the race, complicating Chelsea’s chase. United are looking to strengthen their attacking line and have made a ‘fresh approach’ for the services of the 33-year-old.

Barcelona, for their part, must still reach an agreement to help them get out of their financial bind.

While Chelsea remains in control, the more they wait, the simpler it will be for other teams to join the picture (as it happens in just about any transfer deal).

Meanwhile, in somewhat related news (i.e. one in, one out), Sky Deutschland reports that Callum-Hudson Odoi is getting closer to a season-long loan to Bayer Leverkusen, with only the final terms of the arrangement need to be confirmed.

The present stumbling block is the introduction of a buy-option. Chelsea appear willing to put it at €30 million, which is in line with the player’s valuation. However, Leverkusen cannot or will not pay this amount and is attempting to reduce the cost. Regardless, the transfer is scheduled to take place in the following days.