According to reports, Chelsea have made a bid for Pierre-Emerick Aubameyang from Barcelona of roughly £10 million, plus Spanish defender Marcos Alonso. 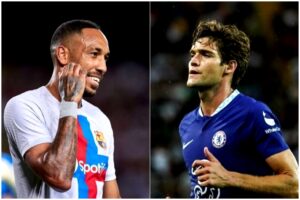 Pierre-Emerick Aubameyang’s transfer to Chelsea is about to be finalized after Barcelona accepted the player-plus-cash deal Chelsea made this morning.

Thomas Tuchel‘s search for a new striker is about to come to an end after the Blues decided to part with defender Marcos Alonso for roughly £10 million plus.

Chelsea’s new official bid for Pierre Aubameyang has been received by Barcelona, which again includes Marcos Alonso as part of the deal. Negotiations are progressing on the add-ons structure.

🚨 Chelsea and Barcelona have reached an agreement for the swap deal between Pierre-Emerick Aubameyang and Marcos Alonso!

Waiting for the official confirmation… 🔜 #CFC

The two clubs have met multiple times over the past few weeks, but it was believed that their transfer strategies couldn’t be more different, with Chelsea wanting to include Alonso in the trade and Barcelona insisting on a cash-only transaction.

However, it looks the Premier League team has gotten their wish, as Aubameyang is anticipated to finalize his transfer to London today.

The Athletic reports that Aubameyang will sign a two-year deal with an option for a third year if the Gabon international makes enough appearances for the team in the second year.

Barcelona, meanwhile, has been eyeing Alonso all summer, with the Spaniard regarded surplus to requirements at Stamford Bridge after the signing of Marc Cucurella.

Over the weekend, Aubameyang and his family were the victims of an armed robbery in which robbers stormed into their home and took a lot of belongings. After being hit with an iron bar, Aubameyang is said to have shattered his jaw.