Chelsea have ‘rekindled their interest’ in Crystal Palace midfielder Wilfried Zaha, as Thomas Tuchel looks to boost his attack before the transfer deadline. 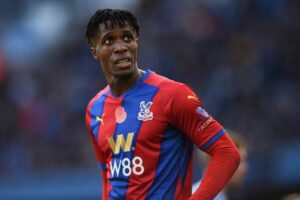 Todd Boehly has already spent almost £180 million this summer, but the Blues are poised to confirm the £70 million signing of defender Wesley Fofana before the deadline on Thursday.

They’ve also been connected with Cristiano Ronaldo and Pierre-Emerick Aubameyang, with Tuchel reportedly looking for a focal point for his front line.

Chelsea are also interested in Everton winger Anthony Gordon, who is valued at £60 million.

However, according to the Independent, the German is open to a transfer for Zaha, with vintage No.9s in high demand.

Palace have so far resisted any move to sign Zaha, and the Ivory Coast international is thought to be worth £80 million. The fact that Zaha is in the final year of his contract, on the other hand, hurts their position.

The source claims that Chelsea is “willing to keep their options open” despite their desire to finalize a deal for Pierre-Emerick Aubameyang, a former forward for Arsenal.

Tuchel wants a front line that can switch quickly, and Zaha has long desired a transfer to one of the “Big Six” clubs, the report continues. The Eagles’ desire to sell and their asking price play a significant role in the sale.

Jorge Mendes has reportedly returned to Chelsea to see whether a Ronaldo deal is still feasible, but Tuchel is reportedly still’reluctant’ to sign the wantaway Manchester United player.

Chelsea has seven points following four games in the Premier League so far this season.

Tuchel’s options in the final third have been limited by the exits of Romelu Lukaku and Timo Werner.

Fofana is on his way to Stamford Bridge, and And so could Palace star Zaha. Aubameyang might be moving to Chelsea as well. Perhaps by Thursday, Ronaldo might also pull off a surprise move.