Conversations between Manchester United and Barcelona are escalating for a number of players, according to a report by Spanish publication SPORT. Barcelona has proposed a like-for-like deal involving Sergio Dests and Aaron Wan-Bissaka at the most recent meeting, which is focused on two undesirable right backs.

Aaron Wan-Bissaka was a sought-after signing when he joined Manchester United from Crystal Palace three years ago, thanks to a strong season with the Eagles. However, the 24-year-old has gone through ups and downs throughout his time with Manchester United, performing admirably in his debut season before falling short in the following seasons.

The former Crystal Palace defender has now fallen below Diogo Dalot in the Old Trafford pecking order. Wan-Bissaka has yet to make an appearance for Manchester United this season, with Erik ten Hag preferring Dalot as the club’s first-choice right-back. However, numerous high-profile European clubs, notably Barcelona, have set their sights on him.

The Catalan giants have been looking for a right-back for several weeks, with Dani Alves’ exit as a free agent prompting them to look for a replacement. And Barcelona’s desire to sign a new right-back heightened after Sergino Dest failed to impress Xavi Hernandez during the club’s pre-season tour of the United States.

Dest is no longer needed at Camp Nou, and Manchester United is one of his main pursuers this summer. Barcelona was interested in signing Cesar Azpilicueta before the Chelsea captain signed a new contract with the west London club. Since then, several right-backs have surfaced on Barcelona’s radar, notably Wan-Bissaka. 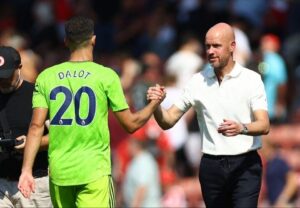 👀 “Barcelona keen to deal with United for Dest, but depends on United’s other movements – and Dalot has also adapted well under Ten Hag.”

Manchester United should be interested in the like-for-like exchange deal since it allows them to keep Dest while releasing an undesired player from their roster. As the summer transfer window closes, it will be intriguing to observe how the encounter between Manchester United and Barcelona plays out.

Cristiano Ronaldo fallout, Everything we know and what happens next