ARSENAL will look to maintain their unblemished start to the season when they face Manchester United this evening. 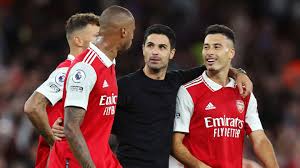 Arsenal is the only team in England’s top seven divisions to have won every game this season, and they will look to keep that record tonight against Manchester United. Erik ten Hag’s team is also in good form, having won three games in a row. Mikel Arteta, on the other hand, has a few late decisions to make regarding his starting lineup. Let’s look at who the Arsenal manager is likely to pick.

Aaron Ramsdale is one of three players Arteta has stated will face a late fitness test to determine whether or not he will play. After suffering a hamstring injury, the 24-year-old played through the pain barrier against Aston Villa.

Matt Turner is ready to take over for Ramsdale, but Arteta will want his No. 1 available, and the England international will want to put himself to the test against United. Arsenal will have until the evening to determine whether Ramsdale’s injury is severe enough to prevent him from playing, but he will almost certainly start.

With five substitutions available to Arteta, he won’t feel like he is wasting one if it becomes clear Ramsdale can’t continue.

Arteta has stated that Oleksandr Zinchenko is still not fit enough to return, which means Kierney will keep his starting spot. Zinchenko has impressed since joining from Manchester City, and his absence from the match against United will be devastating, but Tierney is a more than capable replacement.

Gabriel and William Saliba have already formed a formidable partnership, conceding only four goals in five games while also posing a threat further up the field. However, due to United’s threat down the wings, Arteta may be tempted to make some changes on the right side.

Ben White has performed admirably as a makeshift right-back while Takehiro Tomiyasu regains full fitness, but the United game may be the time to switch to a natural right-sided defender.

Arsenal’s failure to sign Douglas Luiz on deadline day may have already cost them a midfield injury crisis. Thomas Partey and Mohamed Elneny are both out, and while Albert Sambi Lokonga impressed against Villa, Arteta may chose White as the defensive midfielder against United.

PL AWARDS: Castrol Save of the Month honor goes to KEPA

Aubameyang likes and then unlikes ‘nothing personal’ post after Arsenal defeat

Gabriel Jesus urges Arsenal to ‘wake up’ after Southampton draw